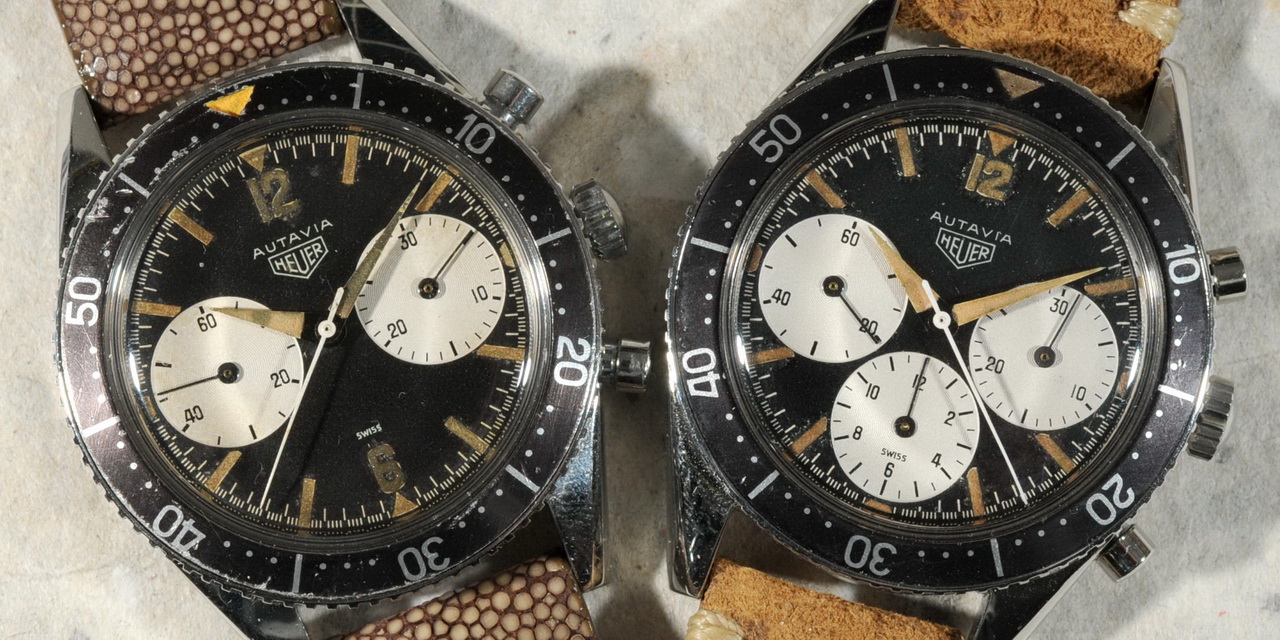 The Autavia chronograph made its first appearance in a 1962 brochure of chronographs. In this brochure, Heuer proudly declared that the “most useful feature of the new Autavia is the outside turning bezel with either a 60 minute or 12 hour division”. Indeed, the Autavia was the first Heuer chronograph with a rotating bezel, a feature that defined the Autavia throughout its production life, into the 1980s.

The First Execution of the Autavia — Key Elements

Hands.  On the first version of these Autavias, the hands were covered with luminous material. On the second version, the hands maintained their dauphine shape, but had polished steel edges, with luminous centers.

First execution Reference 2446 and 3646 Autavias have dauphine shaped hands that are all-lume hands (left); in the second execution (right), the hands had steel edges and luminous inserts.

We have prepared this Registry for two primary purposes. First, studying a collection of these watches is a good way to learn about their elements (hands, crowns, pushers, etc.), and determine whether a particular watch is entirely original or may have had some components replaced. Second, it has been interesting to see how many of these early Autavias we can locate and what this might tell us about the quantity produced. In the world of vintage Heuers, the “big register” Autavias are something of “cult” or “grail” watches, so we will document their attributes and ownership.

Heuer’s use of Serial Numbers

Heuer did not track the serial numbers that were marked on either the cases or the movements of its chronographs. Still, today’s collectors have assembled hundreds of serial numbers for the vintage Heuer chronographs, so that we derive important information from the serial numbers. For example, when we see that this Registry includes only three samples of the earliest execution of the Autavia (luminous coated hands), and that these samples have serial numbers within a span of only 50 numbers [48655 to 48698], we may conclude that there were relatively few of this model produced (at least compared to the later models, with much broader spans of serial numbers).

Can We Sort This Into “Batches”?

Working through the first 20 serial numbers in this registry, we might sort the “Big Register” Autavias into the following batches:

What Was the Total Production of “Big Register” Autavia Chronographs?

I will admit that I have absolutely no clue.  But I at least ask the question, so that others might attempt to answer it.

Some Notes About This Registry

Serial Numbers on Movements.  The Valjoux 72 movements used in the earliest Autavias have serial numbers on the movements.  This was a continuation of the approach that Heuer used during the 1940s and 1950s, but was soon discontinued.

Additional Photos.  To see additional photos of many of the samples included in our Registry, have a look at our OnTheDash Galleries.

Please contact me with an questions about this Registry, if you have an Early Autavia that should be included, or to correct any of the information presented in this registry.  You can write to OnTheDash@bellsouth.net.